At 6pm on Wednesday 30th May, 2018, some 30 people gathered at the War Memorial in bright sunshine to commemorate the bravery of Burnham’s Dunkirk heroes by the unveiling of a blue plaque created by the town council.

The Reverend Gordon Warren RN (Hon) and Honorary Chaplain of the Association of Dunkirk Little Ships, led a thanksgiving and memorial service to mark the 78th anniversary of the heroic actions of Vanguard, Seasalter and Ma Joie out of Burnham and Chantecler, which left from Ramsgate. Between them they saved around 600 soldiers from the beaches of Dunkirk.

Visiting for the ceremony was Dunkirk Little Ship Papillon, which was built in Burnham in 1930 by Lesley W Harris and owned by Mr C P Mackenrot of Westcliff-on-Sea. She sailed to Dunkirk on 2nd June.

After the national anthem, Deputy Town Mayor Louise Pudney removed the Red Ensign concealing the blue plaque. The Red Ensign, also known as the Red Duster, is used by civil maritime vessels to denote their nationality. 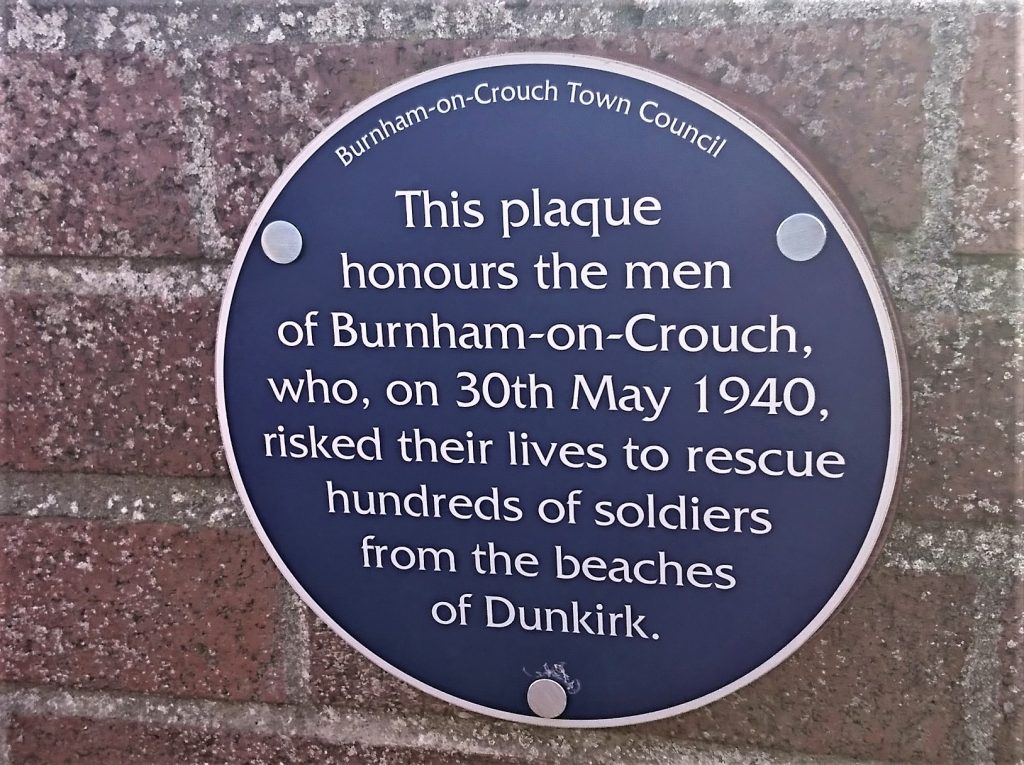 The crowd then moved to the Council Chamber in Chapel Road where Councillor Nick Skeens invited the relatives and guests to raise a glass to ‘these heroes of Burnham’. They then heard an opening address by Alan Bellchambers, who has written a book for the Burnham Museum about the local Dunkirk Little Ships.

Nancy Crisp, daughter of Ken Whiting, said she had managed to track down the boat in Holland and showed pictures of the restored boat.

Janet Brasted, granddaughter of Albert Grimwade, was handed a letter by local resident David Hopkins, who recently paid for the return of Vanguard to Burnham. The letter, from Sweden, was from Michael Grimwade, grandson to Albert, who wrote: ‘I know that when Grandfather was asked why he would make this trip over the channel, he replied, “I have to – my son is over there.” When I saw the pictures of little Vanguard being driven to Burnham, I have to admit I had tears in my eyes – Grandad’s little boat coming home.’ Janet spoke about her grandfather’s regret that the Burnham boats had limited room and that he had had to leave so many soldiers behind.

Kathleen Warnes, the daughter of Len Salmons, described her father as a quiet and unassuming man, commenting: ‘If he were here at this ceremony he would say, “What’s all the fuss about? I was only doing my duty.”’

The only boat to have left from Burnham to survive is Vanguard, which was found vandalised in Canvey Island but has now been rescued, brought home (she was designed and built here) and is now at Mangapps Railway Museum awaiting restoration.

in late 2017, local resident Alan Bellchambers contacted Burnham on Crouch Town Council to propose a plaque be created to honour Burnham’s Dunkirk heroes. A working group was formed, made up of councillors Bob Calver and Nick Skeens.

Councillor Skeens is also working to secure the restoration of Vanguard, and is currently creating a larger information board to be sited at the Petticrow Steps near the Royal Corinthian Yacht Club, the point at which the crew of Vanguard, Seasalter and Ma Joie crossed the sea wall to embark for Dunkirk.

The sign will be paid for by donations from local shops and businesses.

the final design of the sign will be agreed by this working group before it is presented to full council for final approval.